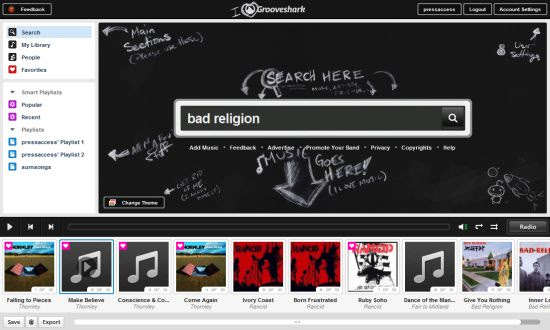 While it is by no means perfect, I find myself going back to it repeatedly as my go-to source for listening to music.

In essence, it has 8 out of every 10 songs I want to hear, full on-demand audio, with no fee, and you don't even have to put in a fake username or password. No signup, no nuthin'...just look for songs and then listen to them.

My big issues in the past with online music services have been requiring listeners to log in, cruddy audio (usually from YouTube videos), lack of catalog, or no on-demand listening (like with Pandora when you want to hear "In My Room" you might hear it 17th on your "Zac's In My Room Station").

Grooveshark seems to dodge many of these (except maybe the catalog issue).

I've read a lot about Owl City.
Oh here it is.

Why are the British so apeshit about Kings of Leon
Ah, This is why

Remember that jam "Afternoon Delight" that was in Anchorman?
No, not the original version, the actual one from the movie with Ron Burgundy and Michael Scott from The Office singing? Yeah that one.

Y'know who was funny? Bill Hicks. Oh, here's a bunch of his stuff.

Aw man. I wanna hear that album by The XX but it's out in my car. Oh, here it is.

I really liked that Emmet Rhodes song on The Royal Tenenbaums soundtrack, I wonder if he recorded anything else. Oh good.

Bloggas be talkin' about The Mighty Boosh, Maybe I'll check 'em out.

A friend was asking me about Shoegaze music. Here you go Blair.

'Member that JAM from college called Deeper Shade of Soul? Holy shit! Urban Dance Squad made more than one song!

That reminds me of "Wash Your Face in My Sink" by the Dream Warriors and "The Deee-Lite Theme" and "Grey Cell Green" by Ned's Atomic Dustbin and The Soupdragons' cover of "I'm Free" whoa...I wasn't expecting that tangent

They've also got a Radio function that works pretty well. 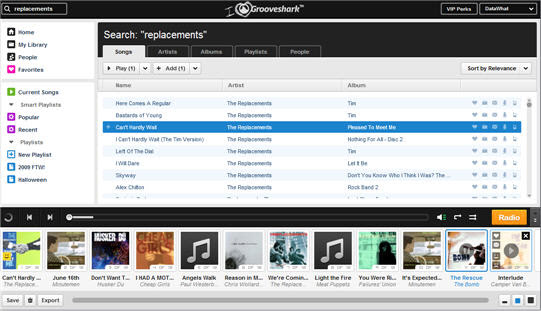 From a Richard Buckner song I got a station of Lucinda Williams, Townes Van Zandt, Songs: Ohia, Uncle Tupelo and Wilco.

Paul McCartney radio was The Beatles, George Harrison, Oasis, The Zombies, The Animals and John Lennon

You can skip as many songs as you like, jump to any song in the list, and Favorite/Dislike any of the songs, or "Flag" them if they are inappropriate or just don't fit: 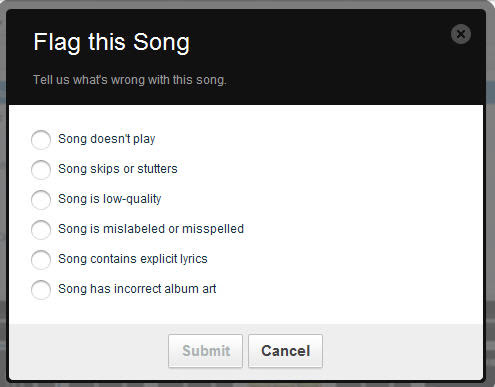 This is good stuff and I hope they're using it to their full advantage.

The business model is...interesting. Apparently (and I am not a lawyer, or sober at this point) you as the user upload your music collection to them, then anybody can listen to it. Grooveshark monitors the plays and pays the rights holder whatever is owed. If somebody chooses to download the song you uploaded, they pay 99 cents, Grooveshark pays the rights holder for the sale, takes a cut for themselves and then YOU as the uploader also get a cut of the profit.

There may be some shenanigans here, but record label EMI bought into their scheme and maybe the other majors will follow.

So I encourage you to scope it out. It's totally free and doesn't require anything from you.

Or: do whatever you'd like. Y'know. Free country and all that.