I have opinions about music.

So the first time I heard Van Halen's new single "Tattoo" was on WRIF and Drew and Mike were talking over the top of it, so I couldn't hear any of the lyrics. I remember thinking that from between the DJ bro-talk of "Cooter & The Bear In The Morning" it sounded a lot like Van Halen.

Then I made the mistake of watching the video which was just awful.
Total amateur hour.

I know it *could* be said that they were harkening back to the old days of low budgets and the fellas just goofin' and riffin', but it (and the YouTube video "ticker announcement" that was the intro of 3 songs from 1984 with recycled footage for 3 minutes) proved one clear thing to me:

YOU NEED A MARKETING DEPARTMENT
Radiohead probably doesn't, Bjork seems to get by just fine, even The Darkness seems to be getting by on their own ego sweat and cocksure hilarity. But if you're going to record the album in your own studio and make your own chunky teenaged kid the bass player, you may not be making all the best decisions in the "Consumer Facing" department.

So then today I watched the other fan-made video that Dave passed around:
and it really changed my opinion of the tune.

While the DLR lyric about tattoos is really sub-par, the verses about coal tattoos and the "crazy stuff we'd never say" being poetry in ink started to make sense (Diamond Dave-sense anyway) so the pretty pichers of gurls in a Van Halen video turned the tide a bit for me.

At one point Dave drops down to a semi-sultry/creepy uncle spoken word part that ain't too far off from other stuff he's done (I'm looking at you "I reach down/Between my legs and/Ease the seat back" which was semi-creepy 28 years ago), but ultimately the song really sounds like Van Halen, so I came to the following conclusion:


"Panama" has the same goofy Diamond Dave-whispered "poetry" ("We're runnin' a little bit hot tonight" vs. "Best believe that needle hurt you") and the barked, party-time harmony-deprived chorus ("Panama! Panama-Aw!" vs. "Tattoo! Tattoo!")
Holy fuckballs, do yourself a favor and re-watch this video compared to the official "Tattoo" video
and see which one seems like it is from a boring outdated era.
"Yankee Rose" is a similarly cornball patri-erotic (see what I did there?) anthem with stunt guitar fireworks and blue-collar aesthetic.

So the song itself (while not spectacular) is not really the problem. The real issue is how it was handled.

Van Halen re-forming with David Lee Roth should be bigger news than Kim Kardashian's failed wedding or where Ryan Gosling was during the Golden Globes. I have read more online about Lana Del Ray's semi-mediocre SNL performance than I have about this album and concert tour. If this announcement was given the proper spin and goosing, and if the video was filmed/edited by somebody else besides a high-school AV Club treasurer, I think the single might have had more impact and more people (besides the folks like me who have an RSS feed for the Van Halen News Desk) would be excited about this.

So the bottom line is thus: 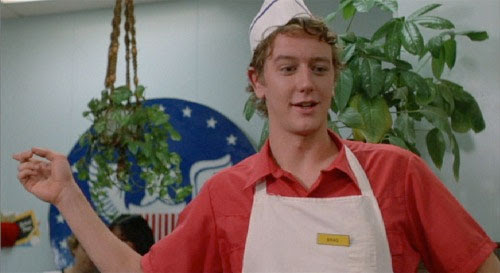