Still Crazy After All These Years

Have a good time

I don't believe what I read in the papers / They're just out to capture my dime
I ain't worrying / And I ain't scurrying; I'm having a good time

Have a good time

Maybe I'm laughing my way to disaster / Maybe my race has been run
Maybe I'm blind to the fate of mankind / But what can be done?
So God bless the goods we was given / And God bless the U. S. of A.
And God bless our standard of livin' / Let's keep it that way
And we'll all have a good time

"Have a Good Time"
Paul Fuckin Simon y'all.

Three birthday cards I got with special messages at the end.

The Bear and the Bird: With Private Message

GoldenFiddle has a nice collection of Found-Lost-Stolen images including this gem:

Great Ancient Roman Graffiti proves that people were shallow and obsessed with sex and pooping since the dawn of time:

I.2.20 (Bar/Brothel of Innulus and Papilio); 3932:
"Weep, you girls. My penis has given you up. Now it penetrates men’s behinds. Goodbye, wondrous femininity!"

Folks over at MetaFilter are begging for a good way to do automatic playlisting on their digital music collections.
Man, somebody oughtta get on that.

Some dubious history regarding Ypsilanti's Frog Island.
Hairy frogs I can get with, but a mayor named "Smedly J. Snodgrass" and a naturalist conveniently named "Pete Boggs?" C'mon.

Funnest!!! Match the sound to the classic video game. Galaga, Frogger, Sinistar, BurgerTime, Pitfall, Joust. They're all in there.
Note: This is on PBS' site, so it must be educational! 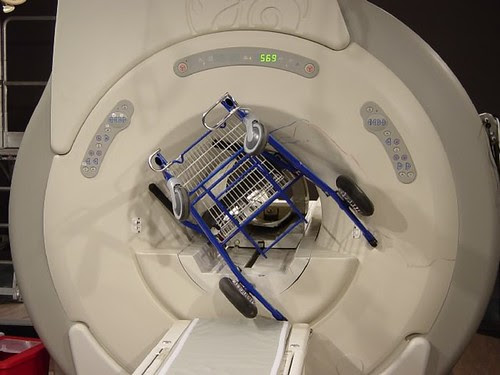 A great collection of photos of metallic objects sucked into MRI machines
due to the crazy magnetic forces they generate.
Please remove your watch before viewing this site.

Some guys who worked in Paul Anka’s band over the years finally got fed up with his post-gig ranting and raving, so one of them tapes one of Anka’s tantrums and posts it on the web. Anka was furious, but never found out who did it.
Beware: lotsa swearing coming from the guy who wrote "She's Having My Baby"