Porchsleeper at the Hamtramck Blowout Friday with the superb Todd Holmes on lead bass.

My Dad is directing 'A Thousand Clowns' at Ann Arbor Civic Theater on Friday. 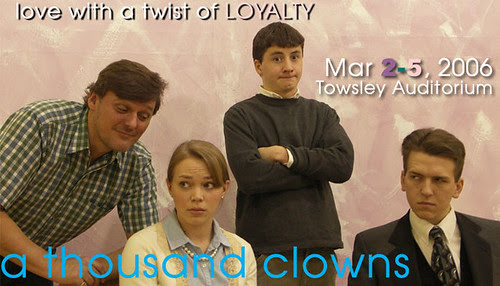 get out there and support the arts.

Speaking of supporting the arts, the Firefly DVDs are on sale at Amazon right now for $25! It was down to $19.86 earlier today which rocketed it up to #2 on Amazon's Best Selling DVDs list for today.
If you don't have it, you should buy it.

Hey Paul, Jeremy sent me this video under the title "ugliest music video ever" and I look at it, and it's Jan Terri! Remember her? That one nice guy from the Tower regional office in Chicago used to be her manager? And she performed at a private party at Marilyn Manson's request? 'Member? What was that guy's name...Jim? Man, I think you gave me a copy of her Christmas album on tape one year...
Mem'ries....like the something something something...

RUDY! RUDY! If you haven't seen this story about the autistic kid who shot 6 three-pointers in a row in the last four minutes of a basketball game, it's pretty awesome.
Note, even if you are a very masculine, robust, full bodied man, you might get a little choked up.

Some would say this is a great curling shot, but a local afficionado sent me this one which is actually even more spectacular.
HURRY!!!

I always wondered what would happen...these four folks decided to drive side-by-side going 55 miles per hour on an Atlanta Freeway and filmed the whole thing.
Verdict: People get mad at you.

Lindsay Lohan's boob surfaced again...this time on the red carpet for a GM event. She looks kinda mad. There are super hi-res versions here and here, but I gotta warn you, the skin on her back is really creepy looking. I like pretty girls and all, and I guess overall she's a good looking girl, but her back is really...haggard. Kinda grossed me out.
Good comment I read: "Look at the inside of her right wrist - she has the word “breathe” scarred into the skin...Best crib note ever."

Other nekkid starlet news: Jessica Alba may sue Playboy for putting her on the cover. Apparently According to her lawyer Brian Wolf, the magazine's decision to put her on the cover to illustrate a story about the 25 sexiest celebrities had caused Alba "immeasurable harm". I don't really see how, but what I like is the photo they included:

Doesn't it look like she got in a fight and part of her jagged tooth is sticking up? Or she was photographed in the middle of spiting out her gum?

Thanks Jeremy
Thanks Derek
Thanks Dan
Thanks Mike