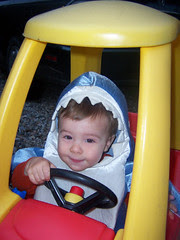 He's getting to the point now where he laughs to himself every time he farts and he gives awesome hi-fives (and not like some kids who keep pounding your hand as long as you leave it out there...he just hits it once and quits), so our social experiment that is parenting is going well.

Seeing The Hold Steady at the Magic Stick.
Almost made me believe in rock and roll again...almost.

Getting 33% off at Borders.
Membership has its privileges.

Buffy the Vampire Slayer Comics
I like the fact that they're calling the comics "Season 8" like it is what the TV series would be if it continued...not like some "Alternate reality" or series of flashbacks or anything.

Steve and Angie doin' it right.
Seven of you know what I'm talkin' 'bout.

Creamy peanut butter on farmhouse white bread and skim milk out of a paper cup.
Something about this combo really works for me.

Going in for one night to do backup vocals on Porchsleeper's EP "So Much More than This"
All of my favorite things about being in a band with none of the equipment lugging!

My Motorola Q phone.
This is the first "smartphone" that I've had, and the ability to do Google searches at the dinner table has never been easier!

My freakish obsession with Futura.
There was like a monthlong period where I saw this font several times a day, every day.

My teen-like obsession with the Beatles song "What You're Doing"
Completely overwhelming for like three weeks. 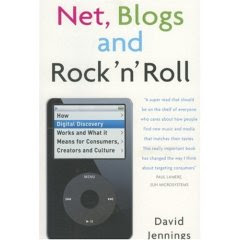 Featuring jacket quote by yours truly.

The website Me*dia*or
A catch-all site for music and technology news. Indespensible for my daily activities.

The blog The Comics Curmudgeon.
Finally somebody who lovehates the daily newspaper comics as much as I do! It takes a couple posts to get the lingo down ("FooB" is "For Better or for Worse") but once inside, you can marvel at the snarky awesomeness. Here is a good place to start.)

Similarly Marmaduke Explained held a place in my heart this year.
EVERYTHING YOU CREATE IS CANCER AND MADNESS

Seeqpod's music search
The first place I look when trying to find a song online.

SkreemR's music search
The second place I look when trying to find a song online.

Songza's music search
The third place I look when trying to find a song online.

LOLCats
O I see what you did there

Spam from MEGA_DIK
"Cuties always whizgiggled at me and even men did in the civil lavatory!
Well, now I smil at them, because I took M_E GA D IK
for 4 months and now my shaft is badly more than national. realize"

I read somewhere that after the past couple of Wilco aural freakout explorations, Jeff Tweedy wanted to write little songs that you could put in your pocket and take with you. I like that. I wanted him to do that too.
Listen here:

Band of Horses - Cease to Begin

Like glue in my head. Every single song. Thanks Derek.
Listen here:

Amy Winehouse - Back to Black

I like the fact that she's a total wreck. Like "probably likely to die soon" kind of a wreck. It's very rock and roll.
Listen Here:

The Hold Steady - Almost Killed Me and Separation Sunday

In the early hours of waking up and feeding my kid, I realized that MTV actually plays music videos early in the morning. The awkward shuffling and posing of the kids in the video for Lazy Eye tells just as much as the music does, and awesomely the whole album is just as good as the single.
Listen Here:

Is this a country record? A bluegrass record? a heavy metal record? A folk record? Maybe. It is ultimately soothing and charming. Both of these artists could've gone over the top, but it all ends up casual and feeling like a rocking chair on a frayed oriental rug over a wood floor. Thanks Bob.
Listen to "Please Read the Letter" Here:

A GLMS record in the Spring and not the Autumn? I was skeptical but it totally worked and became the soundtrack for my summer.
Listen Here:

Sloan - Never Hear the End of It

A weird mishmash of half-songs and pop opuses. I wish the song "I Understand" was playing every time I open my front door for a walk.
Listen to other songs from the album Here:

Shamefully I listened to this for free online for one day straight to the point where I could sing a lot of the words, fell in love with the album, and promptly forgot about it. I need to remedy that. So do you.
Listen to the whole album for free online Here:

Porchsleeper - So Much More Than This [EP]

Failed relationships and Alcohol. Technically coming out in 2008, but since I know a guy on the inside I got to hear it early. Thanks Kevin and Eric.
Listen Here:

A lot of noise was made about how they chose to release this album but relatively little notice was taken of the solid music available in those downloads.
Listen Here: and other places online.

Jason Isbell - Sirens of the Ditch

This came out 1.5 million years ago, and I liked the tunes in The Life Aquatic, but the album as a whole really cooled me out this year. Thanks PJ.
Listen to "Rebel Rebel" Here:

Hard Lessons - 'See & Be Scene"
Why weren't these kids on The Next Great American Band?

Lily Allen - "Smile" and "LDN".
The rest of the album got a little dull for me.

30 Rock
I had high hopes for the show last year, but the initial shows were a little flat, but this year they cranked it up to funny. ICU81MI? Hilarious!

Chuck
Not life-changing by any means, but it has a terrified but heroic nerd, a cute girl in a weiner haus uniform, Adam Baldwin from Firefly essentially playing Jayne again, plus the theme song ["Short Skirt-Long Jacket" by Cake] causes my kid to dance uncontrollably.

America's Funniest Home Videos
Tivo makes this hour-long show into the funniest 26 minutes on television. The fact that they have a contest in which audience members guess whether somebody will be hit in the "Head, Gut or Groin" makes this the quintessential American experience. Plus it's run by somebody called "Vin Di Bona" which is one of the funniest names since "Julie Dick-Fudge."

300
Like a comic book but with CGI instead of drawings.

The Simpsons Movie
Like the TV show I watch for free, only I paid money for it! It seriously did not disappoint which was all I was hoping for.

Children of Men
Soooo funny. Like the scene where's she's pregnant and all of those things keep happening to the hairy guy?...Oh wait, I'm thinking of...

Knocked Up
Soooo funny. Like the scene where's she's pregnant and all of those things keep happening to the hairy guy? Hilarious! Plus it had a lot of Katherine Heigl in it who is a babe.

Harry Potter and the Order of the Phoenix
My favorite of the Harry Potter books, and the film version was a solid interpretation.

The Bourne Ultimatum
Bang! Zoom! Kerpow! What just happened? Oh, that guy just got his ass kicked in the shower!

The Blade Runner and Twin Peaks boxed sets.
finally. My only complaint is that five discs of Blade Runner is not nearly enough.

The Tender Bar by J.R. Moehringer
A boy doesn't have a father so he grows up in a bar. Lots of goofy characters and really well-captured snapshots.

Water for Elephants by Sara Gruen
Give me a book about carnies and circus life and I'm a happy reader.

The Time Traveler's Wife by Audrey Niffenegger
Probably the best romance novel about time travel and seducing 13 year old girls I've ever read. One of the top 5 at least.

My Dad had cancer. Christ did that suck.
He is better now. Thanks for asking.

Dave Below is no longer two cubicles away from me.

A pal of mine has a blog that she doesn't post to anymore.
I still e-mail her, which is cool, but not the same as getting those little snapshots of her day.

Junkiness also burned out like the planet that isn't Pluto.
So long, Uncle Junky.

Much like Martin Luther King, I had a really fucked up dream this year.
The chickens are taking all of the good air

My father-In-law had Heart surgery.
He is better now. Thanks for asking.

My work got really kooky and busy.
It seems to be getting better now.

My bro-ham and I have a really cool idea that would totally change the world and we've laid the groundwork for it but just can't seem to pull the last little (big) pieces together.
It's like it's right there...just right there...but we still can't find time to bang it out. So that's a drag.